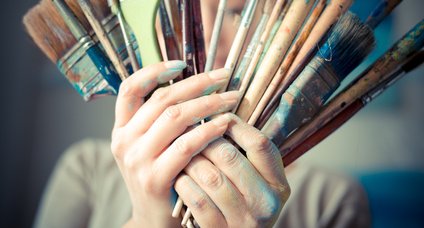 Creativity is one of the hottest topics in business. A search for “creativity” on Amazon yields over 50,000 hits, and if you look up “creativity in business” on Google Scholar, you will get 2,000,000 research articles. More importantly, 60% of CEOs polled in a recent IBM survey called creativity the most important priority for future organizations. Despite all this noise, however, many organizations still struggle with a lack of creativity. In our research, we’ve found no other topic that is so universally recognized as important, but at the same time so difficult to implement. Why is this the case? Here are three big barriers to creativity in organizations and some non-obvious ideas on how to overcome them:

Human beings are hardwired to avoid ambiguity. In fact, a 2016 study from University College London showed that people find uncertainty more stressful than knowing something bad is certain to happen. Simply put, people don’t want to try new things because they might fail, which in an organizational context translates into not wanting to suggest new ideas for fear of making mistakes. While perhaps useful for our cave-dwelling ancestors, these fears make organizations overly rigid and passive, leading to problem solving that is safe, practical, and far from innovative.

To overcome this fear, organizations need to not only publicly highlight courageous actions, but also celebrate actions that did not lead to positive results. It is not enough to give prizes at your annual meeting to the employee who took a risk and won – what the rest of the staff will understand from this is that they have to get it right to be celebrated (which will only increase their fear of failure). Instead, you should bring up on stage the folks who took risks and failed. By doing so, you’re showing that it is the risk taking you’re rewarding, not whether the risk led to a perfect result. Not only that, you should ask those people to share what they learned from their experiments, reinforcing the second important message, which is that learning from experimentation is the crucial ingredient to success. It’s not ‘failing fast’ that counts, but rather ‘experimenting and learning fast’.

A great example of this is Google Wave, which was intended to be a new online communication platform, but ended up failing miserably. While many organizations would have looked at this failure as embarrassing, Google celebrated its employees for attempting to create something creative and revolutionary. As Eric Schmidt said: “Remember, we celebrate our failures. This is a company where it’s absolutely OK to try something that’s very hard, have it not be successful, and take the learning from that“. So, find someone in your organization who has failed, and give them a prize – send a message to the rest of the organization that it is not just OK, but necessary to try new things.

Another common cultural deterrent to creativity is the habit of waiting to finish a perfect product or service before putting it into the market. The problem with chasing perfection in this way is that it can be excruciatingly slow and inefficient. At the same time, it is a given that someone, somewhere, is working on something very similar to your idea. If you wait too long trying to perfect your version, there is a good chance they will get to the market before you.

The crucial thing to realize is that testing in the market is part of the process of making good products and services, and that getting ‘good enough’ out there quickly is more important than taking the time to get it right. One way of changing this cultural norm is quite simple – just start accepting (and encouraging) internal work that isn’t perfect. Embrace memos with spelling or formatting mistakes. Ask for a day-one outline as opposed to a finished PowerPoint presentation. In fact, as a leader you should push back on perfection as a sign that the organization is not moving quickly enough. The more you do this, the more your employees will realize that your organization prizes speed over perfection, and the more they will push to get ideas out into the market early. Sure there will be some bumps in the road, but Facebook’s famous credo of “move fast and break things” has two parts for a reason – you can’t move fast without some damage.

The last and often the biggest cultural barrier to creativity in organizations is stereotyping. A recent survey showed that 80% of American and British workers feel pressured to be productive rather than creative by their organizations. According to psychologist Claude Steele of Stanford University, this in turn creates cultural stereotypes of the “successful” worker being the productive one, leading to a decrease in creativity. In organizations where there is a clear cultural norm of a negative stereotype (e.g., creativity is weird), employees fear the stereotype more than the threat of a lower reward for the actual behavior. That is, they worry more about being perceived as different or strange than they do of being fired or criticized in a review. This fear triggers anxiety, which then strengthens the stereotype and no matter what measurement and reward structures you put in place, that stereotype fear can trump them all.

Celebrating creativity in a very public way can help to dispel this stereotype, but to really attack it, you have to cut out its roots. You do this by deliberately changing the stereotypes that exist in the organization. Science shows that when people expect creativity to be a part of their role, actual creative solutions increase exponentially. Researchers at the University of Maryland asked two groups of people to complete a task that required creativity. One group was told to imagine themselves as “creative poets” while doing the task, whereas the other group was told to approach the task as “rigid librarians.” The results showed that the poet group ended up coming up with significantly more creative solutions, even though both groups had similar characteristics. So to overcome rigid stereotypes that stifle creativity, you just need to start by painting a picture of your organization as an inherently creative place, where weirdness is prized and rewarded, and then watch as people change their expectations and beliefs about their creative abilities in front of you.

Helping organizations be more creative requires true leadership – a personal willingness to risk failure and a focus on the long-term benefits of your experiments. Although not for the faint of heart, this is crucially important for success in the current business environment and, perhaps most importantly, it’s a lot more fun.

Mike is the founder of Juniper – a boutique consulting firm. Faizan Imtiaz, an organizational psychologist, is spending his summer at Juniper as part of his PhD program at Queen’s University. This is the third in a series of articles on what recent scientific research means to leadership and culture.